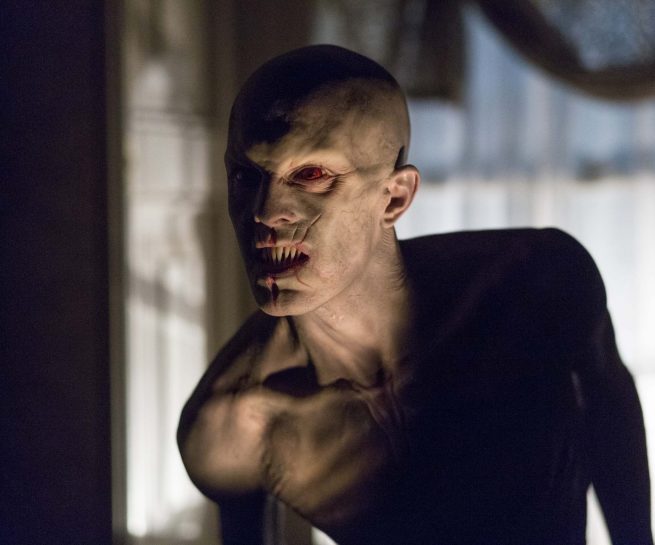 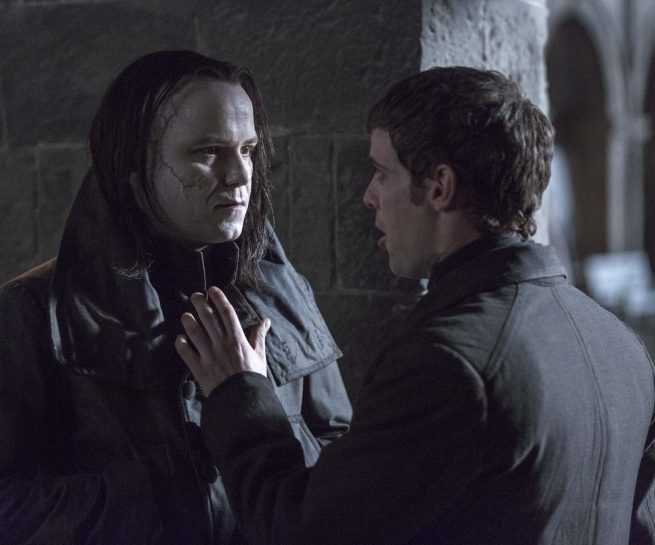 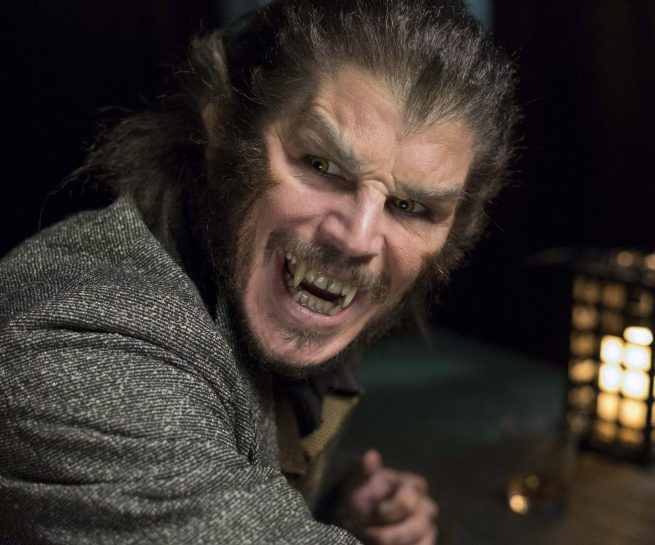 Death of The Vampire 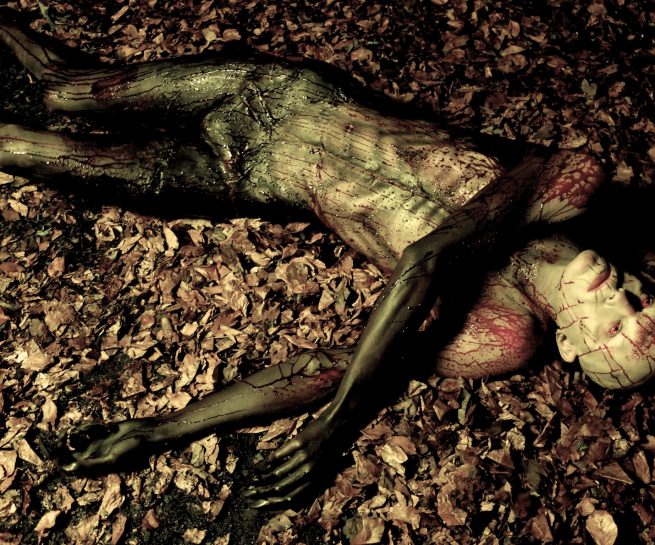 The Creature – Staying True to Shelley 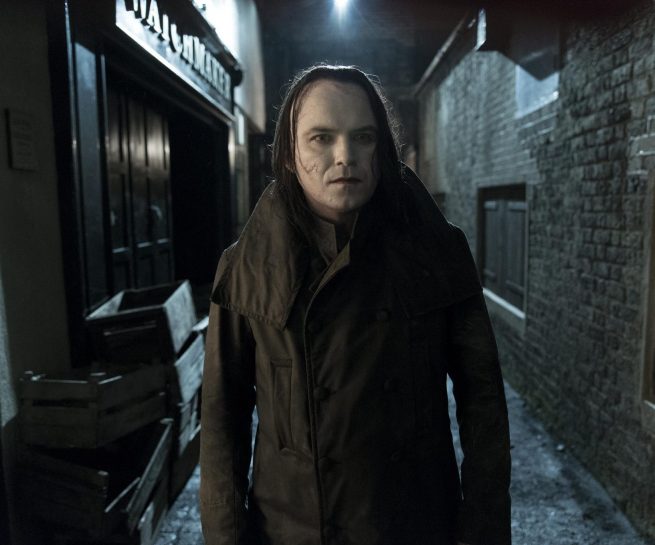 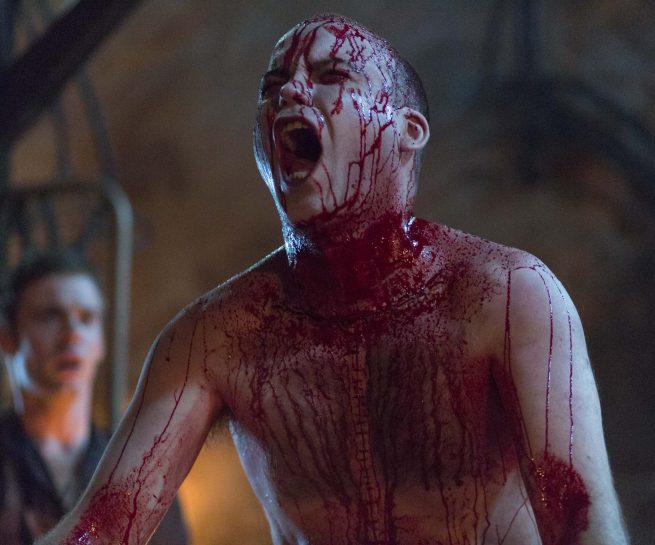 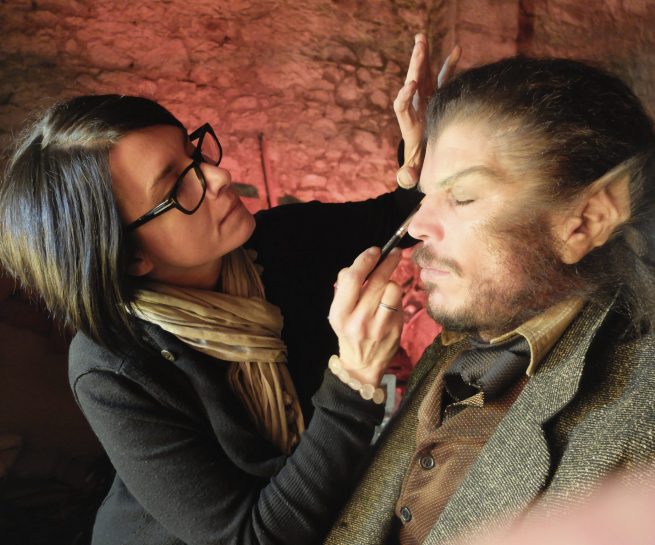 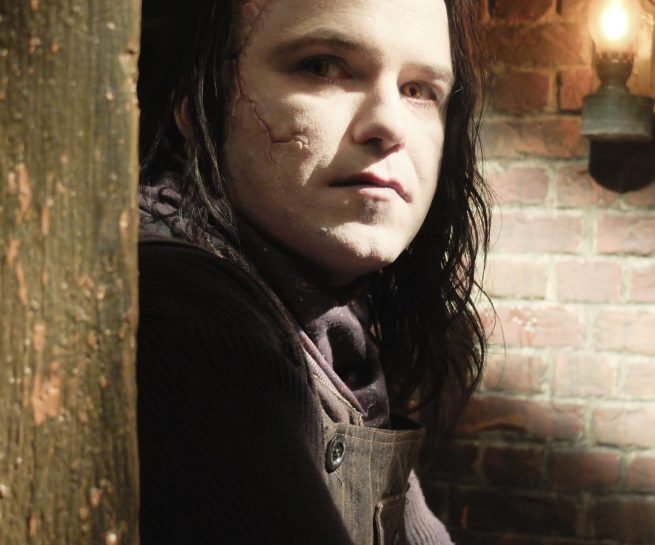 To create the Vampire’s face, red contact lenses and a seven-piece unpainted face prosthetics were applied to Robert. Fine veins were hand painted, followed by an airbrushed makeup base which illuminated beautifully on set.

The whole makeup process on The Creature (Rory Kinnear) took about two and a half hours to apply.

This was the first and only time we see the Werewolf in Season 1. A pre hair-punched forehead piece, false ears, loose laid hair, yellow contact lenses and fangs supplied by Fangs Fx were used to create the Werewolf’s look.

Death of The Vampire

The Creature – Staying True to Shelley

The Creature’s look is meant to be the truest representation from the novel. The facial makeup consisted of six pre-painted prosthetic appliances. The prosthetics were pre-painted to save production time.

Like any birth, The Creature’s entrance to the world was bloody …

Pre-painted Werewolf ears and forehead pieces are applied to Josh Hartnett prior to the application of an airbrushed, light base make-up to match his skin

Good Girl Gone Bald: A silicone bald cap was applied to actress Eva Green for the trepanning scene, which shocked many viewers

Creature Comfort: Six pre-painted prosthetics are applied to The Creature. We nicknamed the front piece scar, which went from forehead to the crest of the cheekbone,  the ‘Norwegian Coastline’ because of its shape. Fine veins were then painted freehand onto Rory’s face beneath the pale base airbrushed make-up to realise a more subtle look.

I cut Alex Price’s hair and shaved the T-area on his head for the prosthetic stitches to look more realistic.

Birth of the Creature

Fresh surgical wounds were applied to The Creature before the addition of fake blood.

You Know the Drill

A small metal plate was inserted beneath the pre hair-punched silicone bald cap to protect Eva Green’s head for the drilling on the Trepanning scene.

A close-up of the applied make-up and prosthetics used to recreate cranial and spine surgical sutures on Proteus.

Make-up and special effects application to show post-mortem hematoma and surgical sutures on Proteus’ hip to indicate the kind of autopsy experiments conducted by Frankenstein.

Primal and Bestial: The Vampire Creature (Robert Nairne) makes his debut … through a pile of corpses.

The Creature applies make-up on himself to hide his ghastly appearance.

If Looks Could Kill

Seeing Red: Red contact lenses were worn by Robert Nairne to give the blood-thirsty look of The Vampire Creature.

To achieve the bald head look of The Vampire I wet-shaved Robert Nairnes head each day he was in makeup.

A short video about the creation of the Creature

The Creature visits the fictional Putney’s Family Waxworks to seek work. The wax figures in this scene are both dummies and real actors.

Hecate, played by Sarah Greene, transforms in front of Ethan Chandler (Josh Hartnett). For this scene, we executed the practical make-up effects on Sarah while the Visual Effects department created the CGI effects for her exit through the mirror.

Vanessa Ives sees Ethan Chandler in Wolfman form for the first time. Having killed prior to this scene, blood effects were added around Ethan’s mouth area.

Vanessa Ives is haunted by a witch during prayer. Even greater attention was paid to the precision of applied make-up and prosthetics because of the close-up shots.

Ethan Chandler’s first on-camera kill.  In a strange twist, there was actually a full moon that night which added to the eerie atmosphere on set.

The Creature working in his workshop at Putney’s Family Waxworks.

A dramatic overhead shot of the aftermath of the Wolfman’s attack.

Peter Murray Back From The Dead

A close-up of Peter’s decaying facial make-up. Three appliances were used for the face and a pre-painted silicone piece for the chest and neck. The final makeup was airbrushed using a ‘spatter’ effect.

The pieces used on the witches were specifically designed to help preserve the actors’ modesty while also showing the uniquely designed branding and scarring for each character.

A close-up look at Josh Hartnett’s Wolfman after an attack.

Episode 6 of Season 2 showed the gradual transformation of Ethan Chandler into the Wolfman. The producers were so desperate to keep the character a secret that he was referred to on call sheets as ‘Brian’.

Decay Of The Dead

Final checks on Graham Butler’s Peter prior to his appearance as a decaying ghost to Sir Malcolm (Timothy Dalton).

Applying Beauty Makeup to The Witch

Applying makeup on one of the witches. The whole process takes about 7.5 hours including breaks. The process starts at about 2am, by wrapping the hair tightly before the silicone bald cap and prosthetics application. We finished with a beauty makeup, airbrushing and blood makeup into the wounds.

Final Touches to The Wolfman

A pre hair-punched bald cap was applied on Josh Hartnett to give the illusion that Ethan Chandler’s hair was cut for the Season 2 finale.

Detailed disfigured prosthetics and make-up were applied to Stephen Lord’s Warren Roper to show the result of the Wolfman’s vicious attack.

A close-up look at the hair, make-up and prosthetic details on The Wolfman. On Season 2 it was decided we would refine the look. This was achieved by using human hair which matched Josh’s own.

Applying finishing touches on Josh Hartnett after the loose laying of hair was applied to his face by chief makeup artist Enzo Mastrantonio. The facial hair is carefully blended with Josh’s own to maintain authenticity and continuity.

The finished look to a one eye prosthetic. Scarring and specific make-up application made the look convincing.

Fake blood makeup effects application on the Wolfman for the sheep attack.

We specifically designed make-up and prosthetics for the witches which let them maintain their nimbleness.

When designing the make-up and prosthetics for the witches, we placed a lot of importance on the actresses’ comfort and the durability of the applications throughout long shoots.  This was an all-girl team – actresses and makeup artists – and we forged a real bond.  Despite being key prosthetic makeup artist, the actresses – Sarah Greene, Nicole O’Neill, Olivia Chenery and Charlotte Beckett – insisted on referring to me as ‘Head Witch’.  It was a great experience, with some great tunes blasting out during the long makeup sessions.

Not Your Usual Witch

Each full body make-up on the witches was individually designed.

In Season 3 we re-visited this bald cap application. Under hypnosis, Vanessa Ives has a flashback to the asylum scene in the episode ‘Possession’. We needed to see 360 view of Eva Green’s head.  I wrapped Eva’s own hair tightly to her head, giving the director greater flexibility.

Camera tests on Wes Studi, the other Wolfman

The changes to the Wolfman for Season 3 included shorter hair, enhancing continuity – especially for the fight scenes.

On Location with The Creature

Final checks on The Creature – always making sure he is perfectly camera-ready for every scene.

Despite the early makeup calls, Rory Kinnear always maintained a good sense of humour. It was a pleasure to work with him on this makeup as he breathed so much life into the character which made it all the more rewarding.

A little pre-painting was required on the forehead piece.  The rest of the makeup and colouring was done on the day of the shoot.

On the backlot at Ardmore Studios night-shooting the fight scene in which Kaetenay meets the Wolfman.

The Gringotts Bank Managers Will See You Now

Ron and Hermione in Disguise

Ron and Hermione don disguises to get into Gringotts

Close-up of a Gringotts Bank teller

Up close with a Gringotts goblin

Applying a chin piece to one of the Gringotts Bank goblins

Sammy Davis, Warwick Davis’ wife, is great fun and lovely to work with

Jennifer Lawrence was brilliant as Mystique – and incredibly patient, as it took six hours to apply the full body makeup for her character

The X-Jet Suit was made from leather and Teflon, so very stiff – but Jennifer Lawrence was a real trooper

There was a great vibe and really good energy on this project – thanks mainly to the fact that it was an all-girl team!

Mystique in the X-Jet

X-jet interior scenes were shot at Longcross in the UK, while exteriors were filmed on Jekyll Island in Georgia, USA

We pre-painted all the pieces before application.  This scene was shot in the Fox Studios in LA

Stage Two of the makeup – a lot of sunburn and dehydration.  It was a tough shoot!Feel The Burn

I carried most of the makeup in a rucksack up and down the side of a mountain, for touch-ups during filming

This was the final stage of Joe Simpson’s make-up; frostbite, snow blindness, sunburn and malnutrition.  It was a privilege to work on Touching the Void, which is one of the most inspirational books I’ve ever read

One of the earlier stages of frostbite makeup.  It was important to get the chapped lips to look as realistic as possible

Touching the Void was shot entirely on location in the French, Italian and Swiss Alps, while some of the wide shots were filmed in Peru